The Church of Saint Martin

A hill rises over Branica valley and on its top stands the Church of St Martin.

The information on the church is a result of my observation and oral tradition. Therefore, I apologise in advance if the information is insufficient and perhaps contrary to the facts stated in professional literature.

I have borrowed Christian iconography for my works, which certainly pertains to the ambience of the church. I have permitted myself a quite personal interpretation of the motif, which is at times perhaps too secular or even humorous. However, it was not my intention do devalue or degrade the ideals of the church. The Church of St. Martin dates from the year 1582. The bell tower and the nave of the church were destroyed during World War II and were renovated by the local people in 1990. In the presbytery, which was not damaged, there is a ribbed Gothic ceiling. The pillars, especially the capitals, from the early Romanesque period, are chiselled with early-Christian symbols, such as fish, grapes, flower as well as the marks of workshops and stonecutters, which are partly visible. The nave is plain and there is a Baroque altar in the presbytery. In the altar there is a canvas painting of St. Martin as a knight, giving a piece of his coat (mantle) to a poor man. The painting is old and is the work of the famous Baroque painter Paroli of Furlanija. The local people saved it from destruction and kept it safe. 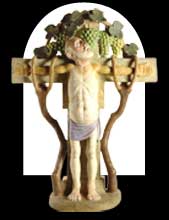 The Crucifix (The Memory of Gardoš)
coloured terracotta | 1991 | 84 x 63 x 24 cm
It is a pleasant, in a way very moving, memory of a true Istrian man Gardoš, my neighbour, who remained alone, ill and powerless in his old age. In the end he was trying to cultivate his small vineyard. That was his last love, which unfortunately tied him to the stony cross of life. He was always an interesting, suggestive, somehow archaic personality, grown with a world that still believed in spells. A better title of the crucifix would be "Homage for Gardoš". 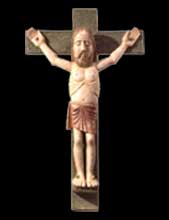 The Crucified
coloured terracotta | 1993 | 95 x 58 x 12 cm
This crucifix is displayed above "The Dance of Death". It was created by recalling the crucifix made of wood from the Ethnographical Museum in Celje that had fascinated me with its disproportions and anatomy. It had inspired me; however I believe I have created something else – of myself– certainly. 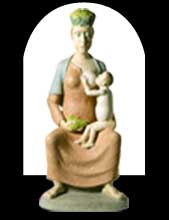 Mary of the Grapevine
coloured terracotta | 1997 – 90 x 39 x 35 cm
The next sculpture, which has already been created purposely for the Church of St. Martin, is called "Mary of the Grapevine" (in contrast with Mary of the Snow to whom the church on the neighbouring hill is dedicated) and portrays her very vividly. She is the queen mother who is crowned with a crown made of grapes. She is nursing the baby, holding him with one hand and in the other one she is holding grapes, which will later be a drink for a child growing into a man. 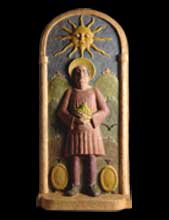 Saint Vincent
coloured terracotta | 1997 | 88 x 40 x 20 cm
The relief depicting St. Vincent, the patron of vineyards, is my artistic interpretation of the national saying, "If the sun shines on the St. Vincent´s day, sweet wine will be poured into barrels." So the man has a saint’s shine and nice bunch of grapes in his hands. Above him there is a personified sun shinning merrily


Let us consider the moment when I discovered the church renovated, empty and got the idea, will and desire to equip the nave for a new chapter of the church's history. The reason for that was also the fact that I was looking for a place where my work “The Dance of Death”, which I had created six years earlier, would be displayed. The coincidence of discovering a renovated, empty main nave was the first step of carrying my idea and desire into effect. 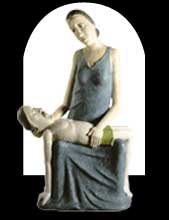 The Compassionate (Pieta)
coloured terracotta | 1997 | 87 x 54 x 33 cm
The last sculpture (which has no association with grapes at the first view) is my variant of the motif of the compassionate wife (or mother) mourning over dead husband (or son) in her lap, which is called “the Pieta” in Christian iconography. What role (if any) grapes have in this is left to the viewer, as well as what the face of the wife (mother) expresses.

Ms. Irene Mislej, the director of the Pilon Gallery (where I was exhibiting at that time), at my request mediated my suggestion of donating “The Dance of Death” to the church to the priest Mr. Janko Krkoč of the Church of St. Martin. He forwarded it to his superior and to the Association for Preservation for Ancient Monuments. When my idea received two 'blessings' we gladly started assembling the work, which took almost four years together with the reliefs now completing the nave of the church.

How and why were the sculptures and reliefs created? Similar to the coincidence of finding almost an empty church for my works, I came to Istria thirty eight years ago by chance and started to live there part time. However, it is not a coincidence that the entire Mediterranean ambience with its historical Romanesque style has always been dear to me.

The Dance of Death (Memory of the Master from Kastav)
coloured terracotta | 1990 | 55 x 220 cm
In 1990 I decided to create a motif of the Dance of Death. How? As a starting point I have used the fact that besides the contents, which were so familiar to me, my origins are geographically from the same environment (Istrian) as well. I have leaned on the characteristics of painting of the old Gothic atelier from Kastav (out of respect). These characteristics include: distinctive horizontal composition, solution of the space with parallel surfaces of different colours, a unique anatomy of skeletons, and so forth. However, what I consider essentially mine is the artistically expressed thought that death does not only accompany people of all classes, professions, etc, but it accompanies men during all their lives from their very birth and to the place of their homes. To hold fast to the traditions of the workshop, I signed (not humbly), the ribbon of the wreath that Death is putting on the grave: “Peter from Grožnjan”. The composition of “The Dance of Death” is technically a shallow relief of coloured terracotta. It was built into rough coating in 1990.

Besides the countryside, which I included in my sculptures of the last ten years, I have also admired the cultural monuments, among which I was especially moved by the fresco “The Dance of Death” from Hrastovlje and another cultural monument from Beram of the masters Ivan and Vicente from the Kastav painting workshop. For as long as two decades I was thinking and meditating on how to express something similar to that as an inhabitant of Istria, not pertaining to a specific school or studio but only a certain artistic charm of the ambience in Grožnjan where we had come from almost whole Yugoslavia of that time thirty seven years ago.


From the book Peter Černe: My Sculptures in the Church of St. Martin at Brje in the Vipava Valley

Peter Černe (1931-2012) was born in Ljubljana. He studied at the Academy of Fine Arts in Ljubljana where he completed the postgraduate course in sculpture with the professor Boris Kalin. Since 1960 he has had over 60 individual exhibitions at home and abroad. He also participated in numerous group exhibitions of Slovene and Yugoslav arts at home and worldwide. He took part in the international symposium at Kostanjevica na Krki in 1960 and in the international symposium at Šmohor in Carinthia in 1972. He was awarded numerous prizes and awards, including the third prize for sculpture at the International Mediterranean Biennale in Alexandria in 1968, the Prize of the Prešeren Foundation in 1969 and the second prize at the First Slovenian Triennial of Satire and Humour Aritas, Šmarje pri Jelšah in 1995. Peter Černe lived and worked in Ljubljana and as well as in Grožnjan in Istria.